A bit to the Northwest of the city centre of Udenhout lies the stunning castle; De Strijdhoef. Locals lovingly call it; The Castle.

The history of this beautiful estate can be traced back to the 14th century, the current mansion however, was built around the year 1760. It was likely built by William Jacob Frederik Baron van Dopff, who was a general-major in service of the State. Special paintings have been preserved in the left wing of the mansion. These paintings were made by Dirk Dalens III. These paintings were more like linen wallpaper  displayed on a wooden frame. They were probably made around the year 1742 and brought to the mansion in around 1787. They depict the idyllic landscape of the surrounding areas of the Strijdhoef.

Apart from the mansion the grounds also have two so-called "Built-homes." Those most likely date from the same construction year as the mansion itself, but in 1845 a modern neo-gothic front was added to these buildings.

The grounds span around 34 hectares wide. Half of the grounds are covered by lush forests while the other half are covered by large meadows. The garden is a beautiful depiction of 18th century water landscaping, a star forest and include multiple ornaments. The estate has free access. Making an appointment is necessary when entering the mansion and direct surroundings 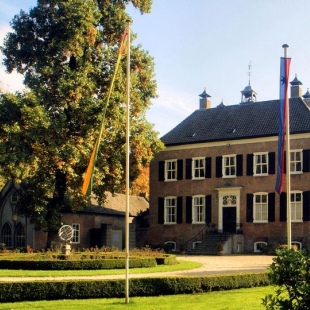