You can visit RAW at the Railway Zone in Tilburg. RAW stands for Restaurant Always Welcome. You enjoy a delicious cup of coffee here, as well as a hearty lunch or teeth watering steak.

It had always been known that the name of the restaurant would be RAW, but that it would stand for Restaurants Always welcome was decided after a few beers, according to Leander Willemstein, the face behind RAW.

Leander had extensive experience in the restaurants business. He went looking for a new challenge after managing Café Stoffel for twelve years. That is when Rien van Linschoten told him about a new project in the Railway Zone. "When I first entered the restaurants I was everything but excited. Later, when I received images of what it would become, I changed my mind, something which I never regret, not even for a second."

After Leander decided to participate in this new venture a team of 5 people was assembled; Leander, Rien, two ladies from Amsterdam and Dirk de Leeuw. With RAW they want to emphasize the raw industrial aspect of the area and let it come back in the restaurant.

"RAW is not a restaurant with a crazy menu, we want to keep it simple and pure. Emphasize the ingredients and where they came from." RAW focuses its dinner mostly around steaks, its menu including only 6 main courses. Their price is about the same as a café.

RAW has room for about 100 people. In the summer time the restaurant is expendable with a terrace creating room for up to 120 people in total. The terrace has a festival feel about it, with all kinds of furniture, different parasols and great atmosphere.

RAW is also available as a wedding location, or to host a party. RAW is open seven days a week from 10 a.m. to midnight. 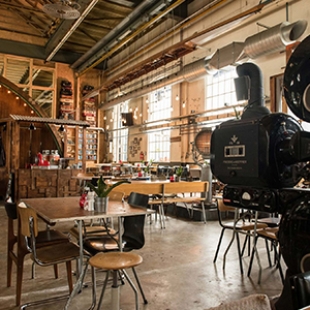